The origins of Naburn hospital predate the opening of the buildings themselves by many years. The City of York, although home to York Lunatic Asylum (later Bootham Park Hospital), The Retreat and the North and East Ridings County Asylum (later Clifton Hospital) the pauper lunatics under the care the City Corporation were not provided with their own accommodation for over sixty years following the Lunacy act of 1845.

Initially such persons were concentrated primarily at Clifton after it opened in 1847 until pressure for space meant that the joint committee terminated the agreement by which York inmates were housed. It was then necessary for alternative provision to be found at York Lunatic Asylum where ward blocks were built specifically for such paupers. This arrangement was considered unsatisfactory by the Commissioners in Lunacy who did not approve of rate aided lunatics being primarily accommodated in private or subscription establishments. Despite the commissioners disapproval, the situation remained consistent until the turn of the century when plans to provide a dedicated structure for the purpose.

A site was purchased comprising farmland of Acres House Farm, close to the River Ouse south of the city. Access was via Naburn Lane running between the villages of Naburn to Fulford on the Selby Road.

The original plans for the site were provided by the Alfred Creer, City Surveyor and caused some consternation within the architectural fraternity who felt that the development should be handled by a qualified architect. They also objected strongly to the means by which the designs had been produced, with the plan reported to have been based upon those of the Cleveland Asylum of Middlesbrough Borough Council with advice from its’ superintendent. After intervention from the Commissioners in Lunacy the revised plans, still by Alfred Creer, were accepted in 1901, with the new building being ready for use in march 1906 when the first inmates were transferred from Bootham Park and other institutions.

The asylum as planned was approached from Naburn lane to the north where a gate and lodge protected access to the grounds and principal drive. A short distance to the east stood six cottages built to accommodate married attendants and their families. A spur from the main driveway led west into the grounds of Red Roofs, the home of the Superintendent. Returning to the driveway to the main building a large detached chapel was provided just to the east and the avenue was terminated at the administration block. To the east stood the maintenance yard, boiler house, workshops and mortuary. A distinctive water tower stood in this area and featured a large clock face on each side, visible for miles around.

To the west of the administrative block were the laundry, sewing room and drying grounds, which were intended to be staffed by female patients. The central section comprised the usual arrangement of steward’s stores, delivery yard, kitchens and recreation/dining hall followed by a residence for the Assistant Medical Officer on the south facade. To either side of this stood the male and female wards arranged according in an echelon formation linked to the service areas by a network of corridors. The roofline of the ward blocks was enlivened by the provision of tall ventilation towers on four of the six wards. The buildings of the main complex were in red brick with slate roofing and double hung wooden sash windows. To the south, Acres House farm was modernised and largely reconstructed to serve the new asylum,

Operational capacity at the asylum varied between 350-450 over much of its existence, with only a proportion of the accommodation occupied by York patients. As this made the asylum expensive to run, means of attracting revenue providing inmates was necessary and although competition for private fee-paying patients remained fierce locally, the City was successful in leasing spare capacity to authorities who did not have their own dedicated asylums subsidising running costs.

World War I brought a period of constraint as patients were transferred from Newcastle City Asylum as it had been passed to the military for use as the Gosforth War Hospital, although these were returned after the cessation of hostilities.

Unlike many mental hospitals in the interwar period the City of York Mental Hospital, as it had subsequently been renamed, was not under significant pressure for space and was not subject to substantial programs of expansion. Overcrowding was not a regular feature and tended to occur more as a result of having to close wards due to staffing shortages. Further space was vacated during the late 1930’s as patients from West Hartlepool and South Shields, both County Boroughs in the County of Durham relinquished their long term contracts with the City of York as both boroughs had entered into an agreement with the Borough of Gateshead to transfer their patient’s to the Gateshead Mental Hospital at Stannington, Northumberland instead.

With the outbreak of World War II the hospital was able to relinquish two wards to the Emergency Medical Services for used for civilian casualties. The grounds to the east of the main drive were handed over for the construction of a complex of ‘hutted’ buildings forming a temporary hospital unit. Following the war this structure subsequently housed prisoners of war until vacated in preparation for handover to the Ministry for Health in 1948.

Meanwhile the advent of the National Health Service meant transfer of the property from the City Corporation and became Naburn Hospital. Naburn formed part of the York ‘A’ group Hospitals management committee which also included Bootham Park Hospital, whilst York ‘B’ group was headquartered at Clifton Hospital. The Retreat remained independent of the NHS and continues to be so to the present. In line with the changes to management structure and the convenient departure of the superintendent at Naburn, the two York ‘A’ group mental hospitals were merged from 1952 to operate as one combined unit across two sites with services being rationalised and concentrated at each site.

A new use for the hutted hospital was found under the York ‘A’ management as a pair of hospitals known as The Maternity Hospital and Fulford Hospital. Although both nominally separate the layout of the existing building meant that certain functions and structures for one hospital were located in the area occupied by the other. The Maternity Hospital, then one of the largest of its kind was to replace the exiting facility at Acomb and offered a comprehensive range of maternity services including an isolation ward and premature baby unit. Fulford hospital was conceptually a general hospital although its limited contingent of specialities were only comprised of Gynaecology, Dermatology and Geriatrics. Operating theatres forming part of the original war hospital were utilised for surgery and radiology facilities were provided which were also intended for conjoint use with Naburn hospital. Further staff housing was provided on Naburn Lane, opposite the main gate which encouraged qualified staff to take up positions at the hospitals, which were comparatively isolated and a new unit was constructed to the west of the female wards.

Revision of facilities amongst the General hospital units in the City’s Hospitals following the merger of the York ‘A’ and ‘B’ groups threatened all three of the hospitals at Naburn with Fulford Hospital being the first to close as speciality patients were transferred to the York District Hospital then under development and geriatrics moved to the City Hospital. After this time the Fulford Hospital remained usable but provided only temporary decant facilities whilst other areas were closed for works. This function ceased in 1983, some months before the adjacent Maternity Hospital was also transferred to York District hospital. Once again this left only the mental hospital on the site, which was by this time also being wound down in preparation for closure. The ‘A’ group laundry service had been relocated to Clifton’s new district laundry facility during the 1970’s. As the ageing population of the hospital dwindled and most units were relocated to the more conveniently placed Bootham Park hospital, those units and wards at Naburn were taken out of use until a point where the remaining facilities and patients could be reallocated space at Clifton or Bootham Park. Unlike later closures which were to be riven by relocation of services out of hospitals in line with ‘care in the community’, Naburn’s eventual demise was brought about largely by spare capacity at the other mental hospitals in the area, and the site was closed in early 1988 ahead of schedule.

Most of the hospital site was demolished soon after closure and very few structures from either the asylum buildings or hutted complex remained at all. Only Acres House Farm to the south and the housing opposite the hospital’s main gate remain, now in private ownership. A small brick substation survives from the Fulford Hospital complex adjacent to the secondary driveway to the complex. Of the Naburn hospital structures, no building aside Acres House Farm remains. The garden wall and gate entrances of 1-6 Hospital Houses survive along Naburn Lane amongst the boundary hedging. Within the grounds the northern part of the avenue of trees alongside the drive approaching the site of administration block remain as do the trees and boundaries from what had been the garden of Red Roofs house. To the south a remnant of the hospital orchard survives, whilst the remainder of the site has been used for the construction of a major retail outlet and its surrounding car parking which opened in 1998 despite protests by environmentalists,

The four 7ft clock faces and mechanism had been built by local clockmaker George J F Newey, having been originally located on the water tower but these were removed and placed in storage by a group of enthusiasts including Newey’s Grandson George prior to demolition of the complex. Efforts by the Naburn Clock Group who have restored the timepiece aim to return the clock to public use, having previously offered it to the City of York’s Hungate office development and University of York’s Hesligton East campus. The bell from the water tower, by John Taylor & Co. of Loughborough, also survived demolition and was relocated to the tower of All Saint’s Parish Church, Helmsley where it forms part of a peal of eight. 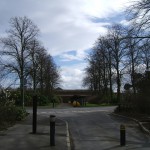 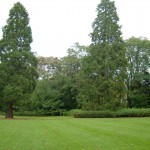 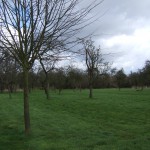 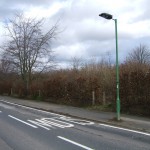 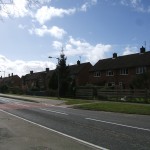 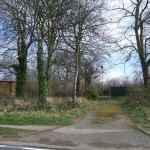 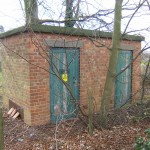 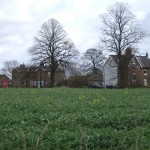 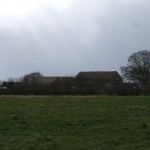 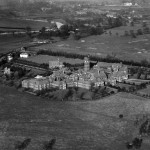 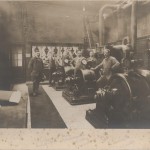